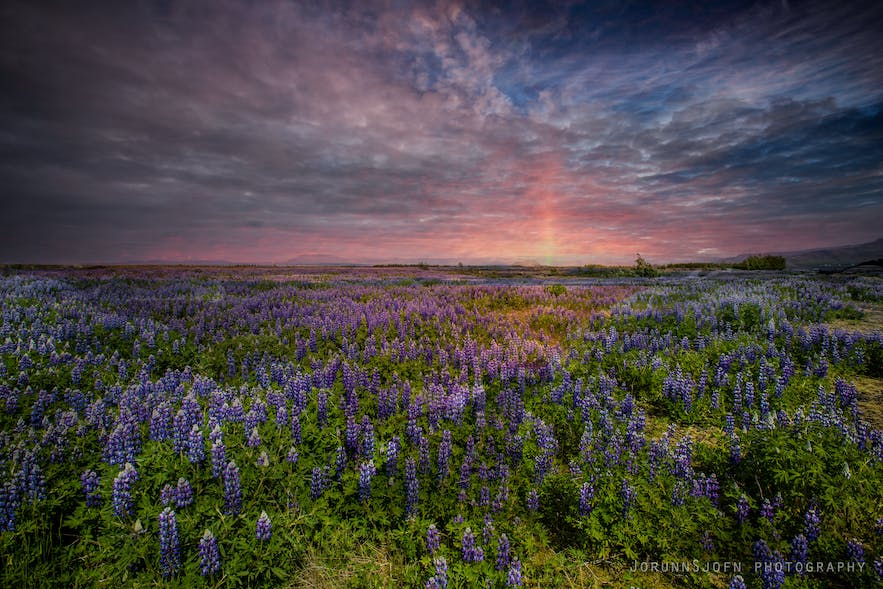 People have been asking me where to find lupines in Iceland. If you like them you should be able to find them easily in Iceland in summer. They are in bloom and visible almost wherever you drive around the country, very often along roads and lakes.

Looking at those purple fields sometimes reminds of a beautiful lavender field and the lupines sure make a beautiful and a vibrant scene wherever you go this time of year. In Iceland we mostly have the purple species but lupines come in several colours; purple, blue, pink, red, yellow and white.

The lupine is one of the taller and prosperous plant in Iceland and can easily been recognized.  In Iceland it has been used for soil fertilization and the plant is able to fix atmospheric nitrogen into organic one by using specialized bacteria from their roots. Although it can be found in different areas of Iceland it mostly thrives on dry raw soils.

What you might not know is that the lupine have been used for medical use as well. Ævar Jóhannsson an Icelandic doctor was the founder of the so called Lupine-tea that has now been used for decades.

Some people use the tea to maintain good health while other have used it after diagnosed with serious illness and need to built up the immune system. Most people have used it along with medication and radiation treatment for cancer. The tea has a mild blood thinning effect so as you see the lupine is not only beautiful and vibrant it's also dynamic. If you want to try the lupine-tea then you might find it in an Icelandic health store.

If you have the chance I recommend you tuck yourself in, go out and enjoy the midnight sun in Iceland with a view over some beautiful lupine field.  It doesn't get any better than that.

Hope you enjoyed this floral tip : )

Rent a car and drive around

The Nature of Iceland