Modrudalur farm is the highest location in Iceland that is inhabited by people, sitting at an elevation of 1539 feet (469 meters) above sea level.

There are many ways to experience Modrudalur farm. For example, you can connect with the locals by staying in one of the turf homes or doing a ring road self-drive tour that passes near the farm. There are several tours to choose from.

The small settlement of Modrudalur farm sits in the Highlands of Iceland, in the Nordur-Mulasysla region, nestled between Egilsstadir and Reykjahlid towns. It’s a cozy farm to visit, with places to stay and beautiful scenery to experience.

Photo from Wikimedia, Creative Commons, by Kasa Fue. No edits made.

About Modrudalur Farm, the Highest Farm in Iceland

The farm of Modrudalur, locally known as Möðrudalur á Fjöllum, is not only the highest inhabited place in the whole of Iceland but also the highest farmland in the country.

Due to its unique location, Modrudalur is far from the main areas that most tourists visit. It is a hidden gem within the wilderness, away from the bustle of crowds.

Despite its distant location, the farm offers most of the things you might need for a quick getaway. It has a place to eat and stay for a relaxing Northeast Iceland and Highlands vacation.

The nearest central town to the farm is Egilsstadir, roughly 68 miles (110 kilometers) away. Meanwhile, it is less than 7 miles (11 kilometers) from the Ring Road.

Modrudalur farm, located between Northeast Iceland and the Highlands, is owned by an Icelandic couple, Vilhjalmur Vernhardsson and Elisabet Kristjansdottir.

Before becoming an attraction in its own right, the farm has a vibrant and colorful history that goes back to the early Icelandic settlement. It is also a story of perseverance and preservation of cultural heritage, led by its owners.

The farmland has existed since the early Icelandic settlement. From 1875, Vilhjalmur’s ancestors were already living on it. For decades, the farm would prosper because of its location on the ring road’s famous travel and tourist route.

However, in 2001, Ring Road 1 was re-routed and moved further to the north of the farm. Because Modrudalur was cut off from this tourist route, the farmers thought of closing the property to move away.

Thankfully, Vilhjalmur Vernhardsson took the risk of rebuilding the whole place and finding ways to bring in more tourists. He revamped many aspects of the existing structures and added more facilities with the help of his wife and family.

Utilizing a defunct, broken-down turf home section of the farm, he built new turf structures that could house visitors. He created a separately fenced area for a campground, away from the livestock. He then went on to rework its already established coffee house, Fjallakaffi, which led to its current status as one of the most loved North Iceland attractions.

At the same time, in 1999, the family established the Fjalladyrd tourism company to encourage more tourists to visit the farm.

Today, Modrudalur is a beloved tourist destination in the Northeastern Icelandic Highlands.

Stay at the Highest Farm in Iceland

This little settlement offers a place to stay that makes you feel like you’ve stepped into a historic atmosphere just off the beaten track in the Icelandic Highlands.

The farm of Fjalladyrd offers cozy accommodations for every traveler’s comfort. With rooms that can accommodate up to 27 people, turf houses and standard rooms are available for reservation throughout the year.

If you are up for a more fun Icelandic experience, the farm has a campsite where you can stay in the summer.

Discover the Turf Homes and Visit the Animals at Modrudalur

Turf houses are semi-underground traditional Icelandic houses made of wood, stones, soil, and turf. Centuries ago, these house styles were popular in the Nordic country because of their excellent insulation against the cold. 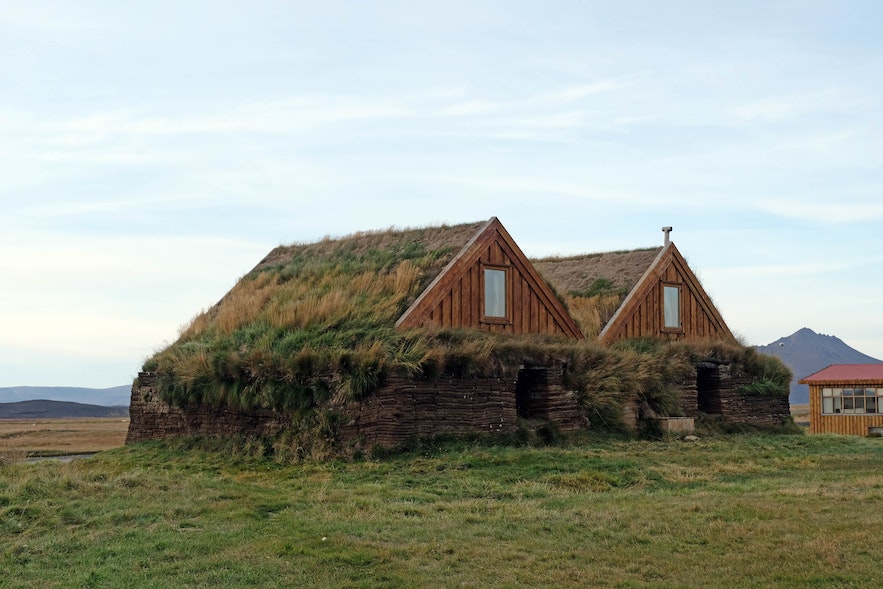 Photo from Wikimedia, Creative Commons, by Kasa Fue. No edits made.

Modrudalur farm is one of the few places in the land of fire and ice where you can still see turf homes today. On the farm, they serve as a place to stay for traveling groups and families.

The houses are surrounded by lush grasslands and set against the backdrop of the majestic mountainous setting of Mount Herdubreid.

On the farm, you will also have the opportunity to spot hundreds of lambs, sheep, cows, and goats, along with a few cats and dogs that roam the grounds. These are animals you would often see on any family-owned farm.

Sometimes, even arctic foxes would venture into the area.

Where to Eat in Modrudalur Farm

Due to Modrudalur farm’s remote location, you’re more likely to work up an appetite. Thankfully, there’s a cafe and restaurant in the area where you can eat local pastries such as the kleina and astarpungur.

While in the Fjallakaffi restaurant, lamb soup and moss soup are tasty options for a starter. For dinner, you could enjoy meats that come directly from the property, such as goose, char, or lamb, all raised on the farm or caught by the owners. The fish and meat offered in their restaurant are smoked on the premises.

Fjallakaffi, also known as the ‘Cafe in the Mountain,’ was just a coffee house originally. It was established by Vilborg Vilhjalmsdottir and Edvald Johannsson in 1976. Now, the farm owners are managing it.

Other Attractions in Modrudalur Farm

One thing that attracts tourism to the farm is its small Icelandic church, Modrudalskirkja. It was built by farmer and artist Jon A. Stefansson in 1949, following his wife Thorunn Vilhjalmsdottir’s untimely death in 1944.

Jon not only built the church, but he also decorated its interior. In particular, the altarpiece in this Icelandic church was handpainted by him. Although he passed in 1971, the church has been looked after by the current owners of Modrudalur farm. The tradition continued after his passing.

Likewise, the farm is a great spot to see the Icelandic northern lights. Since the campsite is open to tourists from June through mid-September, you may be able to catch a glimpse of the majestic aurora borealis under the right conditions.

Although viewing is best between September and March, there is always a chance to see its beauty if the sky is dark enough during your stay.

Northeast and Highlands of Iceland Attractions Near Modrudalur Farm

Although Modrudalur farm is already a great attraction, its proximity to more Icelandic tourist spots makes it even more appealing. The farm can be the starting point before you explore the famous attractions of the Highlands, North Iceland, and East Iceland. 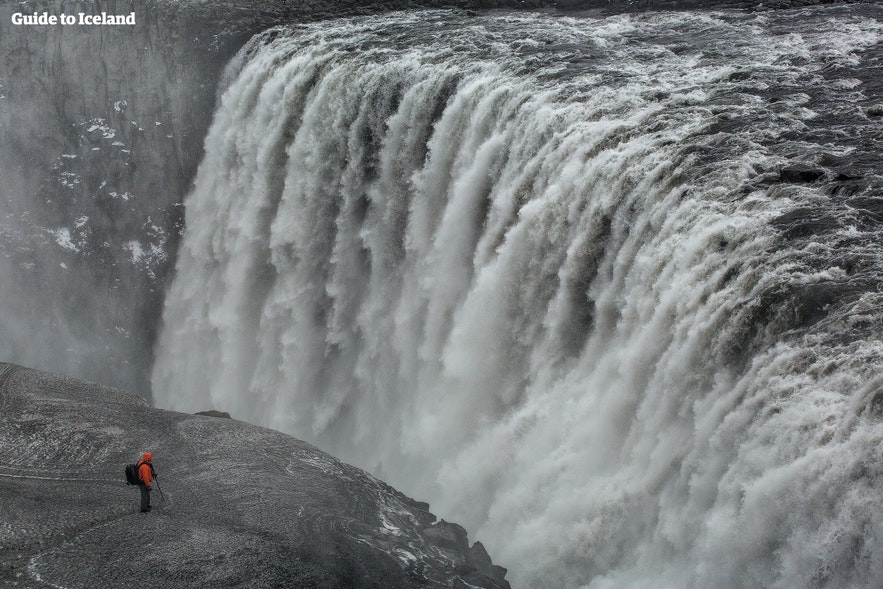 From the farmland, if you drive further to the north by around 41 miles (66 kilometers), you will see the breathtaking beauty of the most powerful waterfall in Europe.

Dettifoss waterfall is one of the most popular attractions in North Iceland, thanks to its majestic beauty and location in the Diamond Circle. Upon visiting the waterfall, you will see the massive water flow from its wide mouth of 330 feet (100 meters), dropping from 150 feet (45 meters).

Within the exact location is the magnificent Jokulsargljufur canyon, where you can see two more waterfalls, Selfoss and Hafragilsfoss. These waterfalls come from the cold waters of the Jokulsa, a Fjollum river from the Vatnajokull glacier.

Another gem of North Iceland is the stunning Myvatn lake, a top-rated site by animal lovers. Lake Myvatn is an excellent spot for birdwatching with its thriving birdlife.

There are approximately 13 nesting bird species within the lake, including the common scoter and harlequin duck. The fertile waters of the lake, surrounded by lush vegetation, make for the perfect spot to support birdlife.

Meanwhile, the appearance of the lake itself is an awe-inspiring view. As an active geothermal area, basalt columns and pseudocraters are scattered throughout the lake’s body. This phenomenon makes geothermal bathing in Lake Myvatn possible.

After a great adventure in the wilderness of Modrudalur, travelers may want to explore a more familiar urban view. You’re lucky because just 68 miles (110 kilometers) east of the farm is the town of Egilsstadir.

As the largest town in East Iceland, Egilsstadir has everything that you may need, from hotels to groceries and restaurants. While in the area, you may also want to visit the East Iceland Heritage Museum.

Moreover, Egilsstadir Airport is the fastest option to take you back to Reykjavik for travelers strapped for time.

Even though it’s off the beaten track, this quaint little farm is one you shouldn’t miss. Explore Iceland’s wilderness when you visit Modrudalur farm and discover the hidden beauty that the Highlands of Iceland can offer.