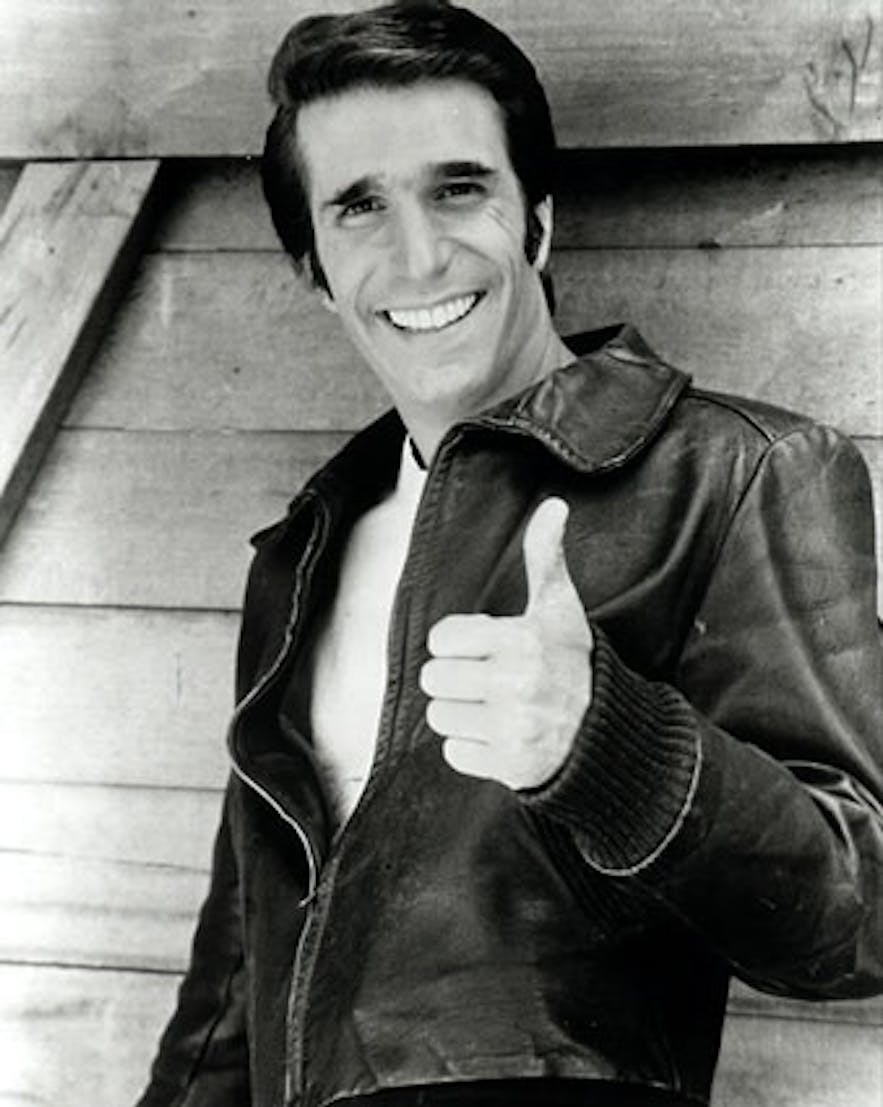 The following message has been approved of by the Fonz. One does not simply question the Fonz.*

1) The international Sonar festival, dedicated to advanced music and new media art, travels to Reykjavik this coming month and will be celebrated on the 15th and 16th of February. The festival highlights the most interesting homegrown talent and the scene in the city where it is celebrated. The festival originates in Barcelona in Spain and is held there annually but also travels to other cities. Sonar is always focused on the current landscape of electronic music and the interactions and mashup with other artistic forms and supports innovation. Sonar by day will entail concerts, an exhibiton area, showcases and at night will focus on more well known leading artists on the international scene. The festival also focuses on creating a close connection between performer and audience. Among performers this year will be Gus Gus, Bloodgroup, Sóley, Trentemøller, LFO and James Blake. For more information about the festival go to the festival's webpage.

2) Dark Music Days, January 31. to February 3. is, despite the name, not a Black Metal festival or a black sabbath (great as the band B.S. is), but a four day music festival dedicated to progressive and diverse contemporary music, with an emphasis on new works and experimental projects. The festival was established by the Society of Icelandic Composers in 1980.

This festival has gained increased local and international attention throughout the years and seen ever more participants. This year there will be 19 concerts: symphonic, sinfoniettas, solo performances, choirs, chamber music, electroaccoustic music and a children's program. Some of Iceland's major performers will be participating. Students from Canada's Brandon University will have two concerts in Harpa and there will be a special concert focusing on contemporary Chinese music. In collaboration with the Icelandic Academy of Arts there will be various worskhops, lectures and Master Classes. Last but not least, the excellent Icelandic Symphony Orchestra, conducted by Ilan Volkov, offers a whole evening of contemporary music .

The festival's homepage can be found here in English.

3) The annual Reykjavik Winter Lights Festival, February 7th to February 10th celebrates light and winter with a schedule that is a mixture of art and industry, culture, environment, sports and history. All kinds of events and activites large and small will be going on his weekend and the city really comes alive, with major artists, galleries, cultural and educational institutions, sport clubs shops and restaurants participating in making the festival memorable for both locals and guests. For more information, check the festival's schedule in English.

4) Metal fans need not fret, as there are plenty of local hard rock and metal concerts going on this month, perhaps most notably viking metal band Skálmöld's two concerts on the 7th and 9th of February, hailing the release of their second album, Börn Loka ('Loki's Children'). The first concert will be in the excellent culture house Hof at Akureyri in North Iceland and the second will be at Haskolabio in Reykjavik. I have already discussed their new album somewhat in an earlier blog entry and hearing that the act will be theatrical in addition to great music, with collaboration from various artists only serves to pique my interest further.

5) Fans of comics/graphic novels should check out the exhibiton of Nordic comics held at the Reykjavik City Library at Tryggvagata in downtown Reykjavik. It is a highly interesting exhibition featuring excellent artists. Those featured are Hugleikur Dagsson (Iceland), Mari Ahoikovu (Finland) Eeva Meltio (Finland), Lene Ask (Norway), Søren Mosdal from Denmark, Nuka K. Gotfredsen from Greenland, Linus Strandberg (the Aaland Islands), Josef Svenske (Sweden). The exhibition started on January 12th and runs until February 12th. As far as I can tell, there is also a number of their works that you can borrow from the library and Hugleikur's work is also available at local bookstores. And finally, if you like comics/graphic novels, check out the excellent Nexus game/comic book/DVD store on Hverfisgata in Reykjavik. A great selection, along with great service by the nice staff.

6) More great music: On February 7th Söngsveitin Fílharmónía, conducted by Hermann Bäumer, accompanied by soloists Sigrún Hjalmtýrsdóttir, Einar Clausen and Hrólfur Sæmundsson along with a huge choir which combines the choir of Áskirkja church and the Graduale choir of Langholtskirkja church will perform one of the 20th century's most popular classical works; Carmina Burana by Carl Orff. Most people have probably heard the iconic O Fortuna, a staple feature in apocalyptic/son of a devil films (The Omen is a classic (pun intended) example), but this piece is so much more than just that, awesome as that part is. Having participated in performing the piece with my own choir a few years back I can simply state that it was one of the greatest kicks I've had in performing in all my life.

7) Even more great music: The Icelandic Symphony Orchestra is preparing for a concert in America and will perform its program, Vestur um haf ('West of the Sea') in Harpa on February 26th. The program consists of the Lemmikäinen Suite by Jean Sibelius, Piano Concert in A-Minor by Edward Grieg and two new pieces by Icelandic composers, i.e. 'New Piece' by Hlynur Aðils Vilmarsson and ARIALITY by Anna Þorvaldsdóttir.

8) And yet more great music (what can I say, I'm a music buff): One of my all time favorite singers, the beautiful and immensly talented Eivør Pálsdóttir will perform concert and chat with the audience along with Icelandic musician Jón Ólafsson in the Salurinn music hall in Kópavogur (this town is next to Reykjavík) on February 6th.

Eivør is from the Faroe Islands and conquered Icelanders' hearts already in the early 2000s. She in turn fell in love with the country, having both lived as studied here and recorded and performed in Iceland often. Ever since, the ties in both directions have been strong and Icelanders indeed often like to claim her as 'thers'.

Eivør is simply an amazing artist, has an incredibly beautiful voice and a creative, expressive and passionate vocal delivery and both writes great songs and interprets others in a unique way. On stage she strikes you as a sort of valkyrie. Clichéd as that may sound it may still the best way I can describe her. Her album Krákan is one of my all time favorites, definitely check it out.

And here below she performs two Icelandic songs, the second one along with Icelandic singer Margrét Eir.

9) The old Thorri month continues with people enjoying Þorrablót, and eating the notorious traditional Thorri food. For more on that, see my previous article. Many restaurants will offer Þorri meals and you may also find it at most grocery stores.

*No comment from actor Henry Winkler. All the best to him. :)