Of Þorrablót, troll friendship and a starry night with Northern Lights 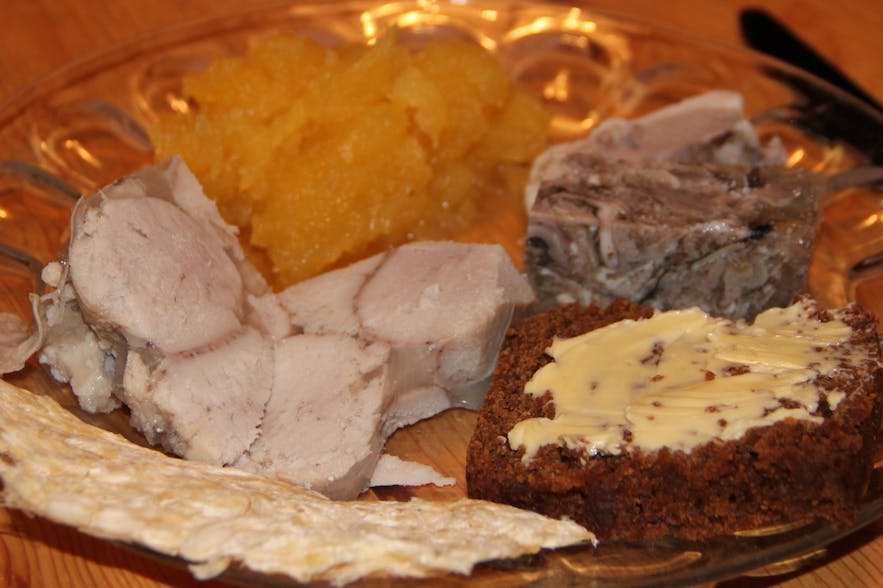 One thing to look forward to in January is the Þorrablót. This is a mid winter festival (traditionally the month of Thorri is the fourth winter month, from mid-January to mid-February) when many Icelanders get together to eat traditional food, what many other people consider simply disgusting food. Much of it is cured with lactic acid. We have Hrútspungar (soured rams testicles, boiled and cured in lactic acid), svið (boiled sheep heads, sometimes cured in lactic acid),  hákarl (fermented shark), sviðasulta (sheep’s loins, made from svið and sometimes cured in lactic acid), hangikjöt (smoked meat),  harðfiskur (wind-dried fish, best served with butter) rúgbrauð (rhy bread), lifrarpylsa (liver sausage, a pudding made from liver and suet of sheep, kneaded with rhy flour and oats), blóðmör (like lifrarpylsa, but with lamb's blood instead of liver), lundabaggi (sheep’s loins wrapped in meat from the sides, pressed and cured in lactic acid), selshreifar (seals’ flippers in alctic acid), mysa (whey, a.k.a. Milk Serum), rengi (whales blubber, boiled and pickled in whey) and of course brennivín, the Icelandic schnaps. I'm not sure if this makes for a complete list but it should give you some idea.

Why do we eat this, you may ask? Well, some of it is actually quite tasty, the lifrarpylsa, rúgbrauð, hangikjöt and harðfiskur being those that least require an acquired taste, being the most ‘normal’ of the bunch. In former times, the salting and souring/fermenting of food was a way to keep it edible for longer, strange as that may sound. Today it is a way of honoring tradition and paying homage to our ancestors, as well as a rite of manhood/womanhood. As for myself, I will have my Þorrablót with Tröllavinafélag Íslands (The Icelandic Troll Friends Association), of which I am a proud member.

What is the Icelandic Troll Friends Association, you may ask? It is a group of about 15 people, founded originally by my brother and his friends. I joined soon after. It is a group of people that like and are interested in trolls and in folklore in general. The established aim is to seek out trolls and improve relations with them and try to establish a better reputation for them. We feel that trolls have all to often gotten a bad press, mainly since most all of the accounts about them were written by their adversaries. We aren’t really superstitious, let’s just say we give trolls the benefit of the doubt. ;)

The association already has two honorary members. The first is the excellent artist Brian Pilkington, who has done much to further the cause of trolls through is artwork and books. The other is the great teacher Herdís Egilsdóttir, now retired. She has done extensive work for children through her teaching, TV shows, books and plays, and trolls have played a large part in her work. In Reykjanesbær in Reykjanes (where else?) in Southwest Iceland you can see one of her most famous creations, Skessan (the female troll) and her cave Svartihellir, located near the marina. This is a great place for children to visit.

In practice, being a member of the Icelandic Troll Friends Association association offers a good excuse to get together for the odd pint, have movie nights (troll-related, of course) go hiking to places were trolls are reported to have been seen, enjoy folk tales together etc. When Finnish band Finntroll played in Iceland, members of the association flocked to the event, and afterwards we got our proud banner signed by the the band. Likewise, we have brought the banner to the metal festival Wacken Open Air, where it has decorated the Icelanders’ tent.

On these trips we’ve usually had traditional food with us, such as flat bread with smoked lamb, a real treat and often Þorri food as well as brennivín.

One of the most memorable trips we had was to the beautiful Snæfellsnes peninsula. We stayed there for the weekend and climbed the mountain Bárðarhaugur, named after the half-troll Bárður Snæfellsás. The snow lent extra beauty to the scene. As we stayed one night in Ólafsvík, we drove out of village to watch the Northern Lights (Aurora Borealis). Undisturbed by the town lights, I got to see some of the clearest and most widely stretched Northern Lights that I remember seeing, blazing and dancing through the cold sky. The sky was clear and the stars were extra bright and we lay down in the snow to enjoy the wonder. We lay there at least half an hour, not minding the cold. Eventually the cold did get to us, however, and we had to return, but we wouldn’t have missed the sight for our lives.

Everyone is free to join or leave the Icelandic Troll Friends Association. There is a yearly fee to cover trip expenses, mainly gasoline.

Given good weather conditions, this should also be a good month for skiing, snowboarding, snowmobiling etc. Good Northern Lights have also been predicted this winter, but they can be tricky, i.e. there’s no guarantee really that they may be spotted, but those who have booked such tours will be compensated, should the lights not appear. I’d be happy to direct you to good tours and other interesting stuff, as well as answering questions about the association and trolls in general.