If you want more time at the pond, you can also choose a self-drive tour of North Iceland.

Photo from Wikimedia Creative Commons, by Chmee2. No edits made.

The pond's proximity to the Diamond Circle makes it easy for travelers to see other North Iceland attractions. These attractions include the whale-watching capital of Iceland, Husavik. This hot spring is made pleasant and clean by geothermally heated waters, is favored by the locals, and is home to endemic goldfish.

Physical Features of the Geothermal Goldfish Pond in Husavik

The Geothermal Goldfish Pond is a hidden gem of North Iceland. It is surrounded by grass, some hills, and slightly inclined land, which makes it difficult to find.

This hot spring is located in a remote location, meaning there are no changing rooms, buildings, or other infrastructure besides the road. But it's not all bad since this isolation means few travelers know about this place, and it is not crowded.

The temperature of the Geothermal Goldfish pond fluctuates between 20 to 30 C, which is not as hot as other geothermal pools. But, this warm water has made it a perfect spot for housing goldfish, thus the pond's name.

Aside from goldfish, you may see some water plants and algae in the pond's waters. But the pond remains clean and suitable for swimming. In fact, it is a favorite among the locals, especially the kids, who would even catch some goldfish.

First, travelers to this pond can marvel over the colors of the goldfish. The pond has a moderately warm temperature allowing fish to thrive in it, and remains unfrozen during winter.

Second, it's a great place to swim, just ask the locals of Husavik, who usually visit the pool for a refreshing bath. If you want the best swimming experience in the pond, visit it during the summer.

Lastly, the pond is near the Diamond Circle, making it a perfect place to rest after a long ride. It is also near the majestic North Coast and many other remote attractions in the north. Thus, you're sure to see many beautiful views surrounding it.

The nearest town to the Geothermal Goldfish Pond is Husavik. This small coastal town, located north of the pond, is only 2.3 miles (3.6 kilometers) away. Also, due to its close distance, you can reach the pool from Husavik by walking or car.

The pool is also near Husavik Airport, which is only five miles (eight kilometers) south of the pool.

How Can I Get to the Geothermal Goldfish Pond in Husavik?

If you're coming from the town of Husavik, you must head down Route 85. Drive for around two miles (three kilometers) until you spot a dirt road leading to the hot spring.

For those coming from other parts of Iceland, the easiest way to reach the pond is by riding a plane to Husavik Airport. You can rent a car from the airport, follow Route 85 north until you reach the dirt road leading to the Goldfish pond.

Is There Anything Else Nearby? 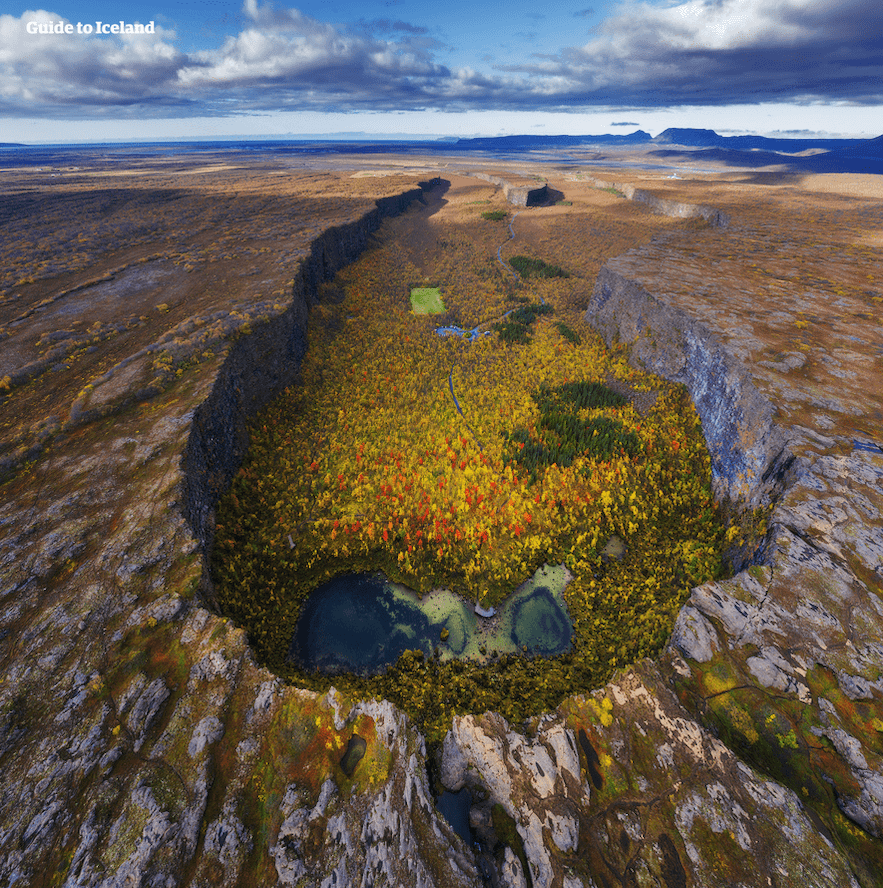 Route 85, the nearest road to the hot spring, is one of the roads that compose the Diamond Circle. The road connects it to the other beautiful attractions of North Iceland. Thus, the road allows you to see the many natural and cultural attractions nearby.

There are two beautiful settlements near the pond, Husavik, Iceland's whale watching capital, and Akureyri, the capital of the North.

Husavik recently gained more attention after being featured at the 2020 Eurovision Song Contest: The Story of Fire Saga. Aside from that, it is home to a beautiful and historic wooden church, Husavikurkirkja, which was built in the 1900s.

Meanwhile, two museums, the Husavik Museum and the Whale Museum tell of the town's seafaring and whale history.

If you're planning to stay much longer in Husavik, make sure to join one of its whale and puffin watching tours. The tours allow visitors the rare opportunity to see these animals up close and personal in their natural habitat.

South of the pond is the second largest city in Iceland, Akureyri, which is 44 miles (72 kilometers) away. There are more than five museums and galleries in Akureyri, such as the Akureyri Art Museum, the Aviation Museum, and the Motorcycle Museum. It is also home to the Akureyri Botanical Gardens, which has been around since 1912.

The magical Myvatn and its Nature Baths are also found south of the pond, 32.8 miles (52.7 kilometers) away. Myvatn is located in an active geothermal area, resulting in many hot springs and other geological wonders.

If you're looking for waterfalls, the most recommended are Dettifoss and Godafoss. These waterfalls are often part of Diamond Circle or North Iceland tours, and the former is the most powerful in Europe.

Asbyrgi canyon, found south of the Geothermal Goldfish pond, was formed around eight to ten million years ago. It spans 2.2 miles (3.5 kilometers), is 0.7 miles (1.1 kilometers) wide, and is often included in many big tours in Iceland.

The canyon is also central to many folklores due to its thick woodland and unique horseshoe shape.